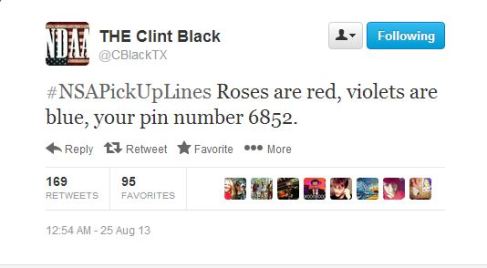 On August 25th, 2013 one of the hash tags trending on Twitter was the #NSAPickUpLines.  Everybody seemed really engaged tweeting about the different  National Security Agency’s (NSA) surveillance activities it has conducted during the last months and that have been published by neswpapers such as The Guardian, The New York Times, Wired, and Wall Street Journal.

The news magazine said that documents it obtained from Snowden show the NSA decoded the system at the U.N.’s headquarters in New York since last summer. The leaked documents stated that the decryption “dramatically increased the data from video phone conferences and the ability to decode the data traffic.”In three weeks, the German newspapers said, the NSA increased the number of decrypted communications at the U.N. from 12 to 458 and it has “eavesdropping posts” in 80 U.S. embassies and consulates worldwide. The NSA was able to obtain a wide range of data, including evidence that suggests the Chinese spied on the U.N. in 2011. It is impressive how people are engaging more an more in the social networks when a news piece like this comes out.